Sudan Prior to Imperialism 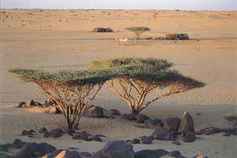 Harsh and Barren Desert in North Western Sudan
Geography/ Location of Sudan
Sudan is located in Northeastern Africa where during its antiquity and its imperial age included South Sudan, Ethiopia, and parts of modern day Eritrea all of which Sudan boarders today. Throughout the middle of the Sudan, exists the Blue and White portions of the Nile River that has served as not only a water source, but also a trading system and a travelling mechanism for merchants and navigators alike. Although the rich and flowing Nile lived throughout the Sudan, the Sudan in its pre-colonial era consisted of mostly vast plains of dry barren earth with little water supplies outside of the Nile that was not suitable for cotton farming or for agrarian production. Similarly, the Sudan also suffered and continues to suffer from the severe aspects of climate change in which there was a consistent variance in the extreme heat within the Sudan that made it difficult for even the farmers near the Nile to produce food, but also maintain a minimal water supply. 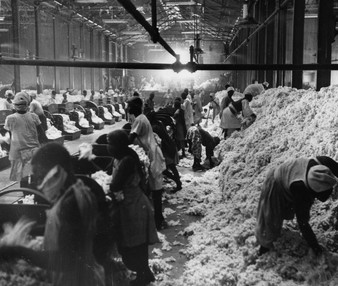 Sudanese Workers in a Cotton Cleaning Mill
Natural Resources and the Sudanese Economy
Prior to the Anglo-Egyptian imperialism in Sudan, Sudan existed as a tribal controlled nation with a fairly weak, inefficient, and disconnected economy based on minimal agrarian trade. During the Nubian, Christian Nubian, Muslim Funj tribal ruling eras, the economic practices of Sudan were fairly similar in which economic practices were based on frequent trading of natural resources along the Nile including cotton, ivory, lapis, and gold. In terms of the internal economy of Sudan before Ottoman-Egyptian control, it existed as an agrarian based economy with the majority of occupational work concentrated in agrarian farming, digging for natural resources, or hunting exotic African animals. In this sense, the economy within the Sudan pre-colonialism existed as an erratic system lacking systematic policies, laws, and structures that was solely based on the trading of goods between hands along the Nile. With this, Sudan was seen as an area with imperialistic potential in which Europeans could administrate absolute political practices while exporting and completely exploiting their natural resources to the economic benefit of European industries. 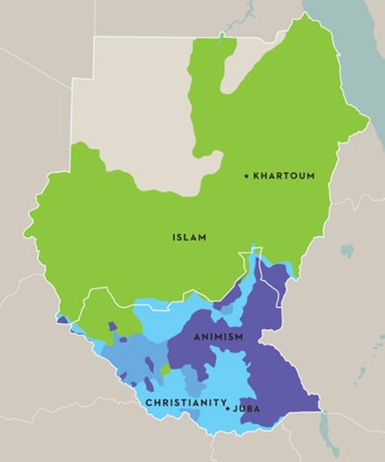 Geographical Map of the Different Religions Present in Sudan
Indigenous Population and Social Structure
From the early development of the Sudan during Nubian times, there existed a social hierarchy based on one’s social and economic position within society that was heavily influential in the Northern region of Sudan. In all the Nubian, Christian, Muslim Funj, Ottoman-Egyptian, and Mahdist political regimes, the highest tier of the social hierarchy belonged to the ruling class and those affiliated with the power, authority, and control of the nobility. As a result of the establishment of the Mahdist regime, the upper class mainly included rich and wealthy Arab Muslims who ruled over the northern and southern regions of Sudan. Below the ruling class, existed the middle-lower class that included farmers and occupational workers who had little income and minimal rights and liberties throughout society. During the Mahdist regime, the lower class peoples were often referred to as sudani or black non-Arab Muslims who in later times during the Anglo-Egyptian condominium were discriminated due to their ethnic origins. In the southern region of Sudan, the indigenous population consisted of mostly tribal communities with their internal cultural and social customs that were not heavily explored due to their isolation from the greater northern community. With the establishment of a social hierarchy throughout the northern region of Sudan, Anglo-Egyptian social forces were able to further establish and heighten tensions between the Arab-Muslims and the Sudani during their reign in order to decrease attention to their oppressive reign and maintain power. Finally, as discussed previously Sudan was a region with diverse cultural beliefs due to the wide range of religions introduced to the nation along with the tribal cultural customs that existed in the South. During its time as a Nubian state, the Sudanese people believed in pagan gods and goddess along with the integration of some Egyptian gods and goddesses.

Religious and Cultural Beliefs-
During the time of Christian leadership throughout the Sudan beginning in the sixth century AD, the indigenous Sudanese population mainly in the North experienced the cultural influence of Christianity while the southern region again preferred their tribally based pagan religions. Similarly, following the rise of the Muslim Funj in northern regions of Sudan, the Sudanese people again experienced a new cultural influence of the Islamic religion that was both instituted in societal religious aspects but in the government ruling powers. As a result of this establishment of Islam in Sudan, the Northern region of Sudan began to completely establish and associate itself with Muslim leaders, ideals, and practices for generations to come that in turn allowed for the establishment of a sense of cultural unity throughout the North. With this widespread cultural unity, the Mahdist regime was able to rise to power and defeat the Ottoman-Egyptian forces in 1880 leading to the initiation of Mahdist power throughout the region. In the future, the Anglo-Egyptian condominium forces sought to use this heavy Islamic cultural identity to instigate  ethnic tensions between the Muslims of the North and the Christians and Animists of the South that drew away from the focus on oppressive Anglo-Egyptian authority. 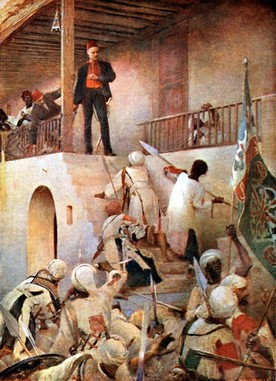 The Physical Conquest of the Sudan by Mahdist Forces in 1885
Government in Sudan Prior to Imperialism
Sudan, prior to imperialism, went through several different bouts of political leadership and therefore was constantly an area of political instability. To begin, there was the establishment of Egyptians in Nubia in 2000 BC where the succinct and organized Egyptian protectorate and government administration allowed for Sudan to prosper and establish itself as an attractive land of imperialism. Following this, Sudan went through stages during the 6th Century AD where both the Northern and Southern regions were overwhelmed by both the political force and religious influence of Christian missionaries. Following the leadership of the Christians, came the rise of the Muslim Funj tribes in 1500, who established both an economically and politically prosperous state while under the new rule of an Islamic sultan. Similarly, the indigenous Sudanese population again experienced a change in political leadership with the rise of the Ottoman- Egyptian forces in 1820 that established a sufficient government with a legal system and political policies, but were prone to consistently oppressing the rights and liberties of the indigenous population. Through the defeat of the Ottoman-Egyptian forces in 1880, the Mahdi regime again established a new central government with different administrative practices, laws, and leaders than the Ottoman-Egyptian power before them. Through this frequent change in political leadership of the Sudan, administrations in the Sudan suffered many difficulties establishing a politically stable government with a consistent administration, leadership, legal system, and civil liberties leading to constant change in leadership in turn making it an ideal place for Anglo- Egyptian forces to imperialize and impose another system of administrative practices.
Conclusions-
From the establishment of a population in Sudan during Ancient Egyptian rule, Sudan has existed as an area prone to frequent change in all aspects most importantly their economy, political structure, and cultural and religious practices.  With Sudan having had economically and politically weak systems with a lack of cultural customs, Sudan proved to be an attractive place for European imperialism in which European imperialists had the complete ability and influence to mold Sudan into a nation of their choice with their ordered specifications.