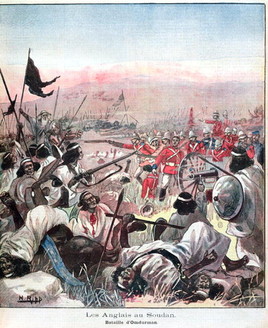 The Conquest of the Sudan
As a result of the growing economic, political, and social corruption in the reign of Mahdi caliphs under the succession of Muhammad Ahmad al-Mahdi, in 1898, Anglo-Egyptian combined forces through advanced weaponry, military tactics, and training were able to gain complete control of the Sudan following the battle of Omdurman capturing the capital city of Khartoum under the leadership of Herbert Kitchener. Following this initial conquest of the Sudan and removal of the Mahdists, the Anglo-Egyptian forces were able to fully establish their existence and influence within the colony of Sudan through the action of several treaties and administrative policies establishing the Anglo-Egyptian combined condominium power with the Sudan under the leadership of both the British Crown and the Egyptian Khedive. As stated in Lord Cromer's Memorandum regarding the functions of the condominium, "the Khedive is under an obligation to follow English advice in all important matters" which truly establishes the British dominance and control in this imperial relationship. In turn, this furthered the age of political instability and leadership rotation throughout the history of Sudanese administration.

Connection of the Nile from Egypt to the Sudan
Egyptian Motives for Conquest
Although there was an Anglo-Egyptian combined government administration and military system following the conquest of the Mahdi Sudan, Egypt and Great Britain as individual governments and nations had different motivations of conquering the Sudan and colonizing it. The Egyptians, under the colonial rule of Britain at the time, sought to establish both a sense of national power, superiority, and liberty while under the control of Britain. Egypt, through conquering Sudan alongside the British, gained a sense of superiority and control over the people of another nation in turn allowing for them to establish a sense of national authority and power while still controlled by the British. The main goal for the national Egyptian powers was to maintain the stability of their economic trading systems in which gaining control over the Sudan allowed for their continual accessibility to trade markets, resources, and trade routes along the White and Blue Nile. Under the corrupt Mahdi rule, Egyptian economic trading practices along the Nile in Sudan were strained and heavily deteriorated due to the lack of accessibility to resources and markets in the Sudan; furthermore, Egypt’s combined conquest of Sudan allowed for Egypt to re-establish its economic prosperity in terms of gaining profit, increasing activity, and product demand in the economy as a result of control over the Sudanese Nile. 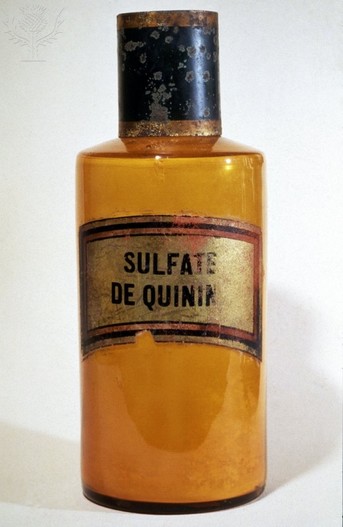 Quinine Vaccine developed to treat Malaria
Justification of Conquest
Following the rise of the Anglo-Egyptian Condominium in Sudan in 1899, the combined British and Egyptian forces justified this conquest through imploring the ideas that they Anglo-Egyptian forces were aiding and protecting the population from disease epidemics, food shortages, national security violations, and freedom from a corrupt Mahdist regime. Following the development of the Quinine malaria treating vaccine in 1850, European imperialist settlers began bringing the vaccine on their imperialization campaigns to protect themselves and their crews from severe malaria outbreaks. European imperialist often implored the concept that the conquest of areas in Africa was necessary and legitimate in order to aid the uncivilized indigenous population with the Quinine vaccine and medical services to fight various malaria and disease outbreaks. Similarly, British administrative officials legitimized their control over the Sudan by arguing that their presence was necessary in order to provide food resources through good imports in order to prevent famines and food shortage related events in the underdeveloped Sudanese society. In comparison to the Anglo-Egyptian forces legitimizing their authority over the Sudan for the purpose of aiding the population, Anglo-Egyptian officials further justified their presence in Sudan by arguing that the existence of their military forces in the Sudan was necessary to maintain national security and civilian safety and protection. In similar fashion, the combined British-Egyptian powers furthered vindicated their occupation of the Sudan by heavily advocating that it was necessary for their forces to invade Sudan in order to “save” the indigenous population from the corrupt and oppressive regime of the Mahdist caliphs. Through the combined efforts of Anglo-Egyptian leaders to legitimize their conquest of the Sudan, the indigenous population began to accept the rule and control of the British and Egyptian forces in turn leading to their ability to establish widespread control and dominance in both Sudan and Africa as a whole.